Causes of hypochromia include

Causes of hyperchromia include: 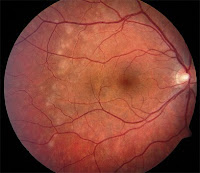 This is usually unilateral ocurring in people in their 20's or 30's, particularly females. The patient has a suddden onset of decreased vision associated with light flashes. There may be a mild APD and mild vitritis. There will be multiple white dots involving the posterior pole and mid-periophey, with teh macula spared and optic disc swelling. Sevceral weeks later the dots and disk swelling fades and central vision returns to normal with remaining foveal granularity and possibly light flashes continuing. 10% may relapse.
Posted by Dr. Kevin on November 19, 2009 No comments:

Email ThisBlogThis!Share to TwitterShare to FacebookShare to Pinterest
Labels: MEWDS 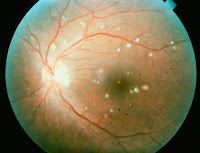 This typically affects people in their 20's or 30's. The patient presents with blurred vision, floaters, or flashes of light.

There may be anterior uveitis w/ vitreous cells. Fundus examination reveals multiple yellow lesions at the posterior pole and periphery, arranged in clumps or linear streaks (Schlagel lines). 40% of these patients have CME. The borders can become pigmented. There may be visual field defects and enlarged blind spot.

Sarcoid and PIC show similar fundus lesions. Sarcoid lesions are usualy more numerous in the inferior fundus. PIC does not have intraocular inflammation.

Treatment is with systemic and periocular steroids. The disesae is recurrent and chronic and the prognosis is variable from good to poor.
Posted by Dr. Kevin on November 18, 2009 No comments:

Serpiginous choroidopathy is bilateral albeit asymmetrical affecting people in their 30's to 50's. It affects men more than women and is associated with HLA-B7. It is chronic and episodic.

The patient may experience blurred vision or metamorphopsia in one or both eyes.

50% of the eyes have vitritis with possible mild anterior uveitis. The lesions are yellowish, first appearing around the optic disc and then spread toward the macula. Choroidal and RPE atrophy then develops over time.

Treatment may be disappointing. Some doctors use steroids, azathioprine, or cyclosporin in an effort to limit recurrence. 50-75% of patients developo vision loss. 25% develop choroidal neovascularization.
Posted by Dr. Kevin on November 17, 2009 1 comment: 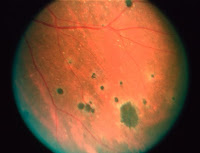 Punctate Inner Choroidopathy affects the eyes of mostly young, near-sighted women. The vision is blurred. Sometimes there are paracentral scotomas on visual field testing. The patient might see light flashes (photopsia).
There is very little inflammation. The macula shows small white dots that eventually become pigmented scars. Choroidal neovascularization occurs in about 40% of patients. The other eye can become involved thereafter.
Treatment options can be with argon laser photocoagulation with intravitreal steroids, systemic steroids, PDT, and possibly surgical excision of the neovascular membrane.
Some patients can retain vision of 20/30 or better. You have to rule out multifocal choroiditis (similar but with inflammation), POHS (look for peripapillary atrophy), and myopic maculopathy (look for more extensive degeneration peripherally).
Posted by Dr. Kevin on November 16, 2009 1 comment: 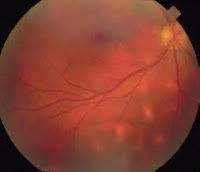 Birdshopt shoroidopathy is recurrent and bilateral occuring in predominantly females in their 40's to 60's who are positive for HLA-A29. Only 20% maintain decent vision in at least one eye. The earlier treatment is initiated the better the prognosis.

Clinical signs are vitreous cells, retinal vasculitis, small white cream colored spots in the posterior pole and mid-periphery. New spots may appear with time. There may be some cystoid macular edema.

Treatment is with systemic steroids or azathioprine and periocular steroids for CME.
Posted by Dr. Kevin on November 09, 2009 1 comment:

APMPPE is a white dot syndrome that is usually bilateral affecting younger people (in their 20's to 50s). It is associated with HLA-B7 and HLA-DR2. It sometimes follows a flu and may occur in association with tuberculosis, anti-hepatitis B vaccination, mumps, Wegener granulomatosis, polyarteritis nodosa, ulcerative colitis, sarcoidosis, and Lyme disease.

It impairs vision causing paracentral scotomas and the sensation of flashes of light. It can cause mild vitritis (vitreous cells) and creamy white lesions starting in the posterior pole and progressing to the peripheral retina, eventually causing RPE changes of varying degrees.

The visual acuity recovers within several months, but the scotomas may persist. Fluorescein angiography reveals early hypofluorescence of the lesions followed by later hyperfluorescence. 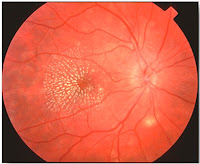 Cat-scratch is a gram-negative bacteria infection transmitted by the scratch or bite of a healthy cat. The most common ocular manifestation is neuroretinitis.

It usually presents unilaterally, is painless, and gradually impairs vision after about a week.

The optic nerve may be swollen and there may be macular edema. There also may be venous engorement and splinter-shaped hemorrages. A macular star of hard exudates forms.

The visual acuity improves after over months as the optic nerve swelling then the exudates resolve. Treatment is with oral doxycycline or erythromycin w ith or without refampicin.
Posted by Dr. Kevin on November 02, 2009 No comments: