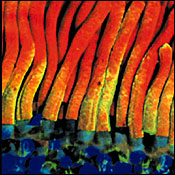 For the first time, researchers have successfully transplanted retinal stem cells into mice with photoreceptor loss, allowing the mice to regain some vision.

“We worked on the theory that cells at a later stage of development might have a higher probability of success upon transplantation. And we show here that cells taken from when the retina is about to be formed, can be successfully transplanted and integrated into the adult or degenerating retina,” says researcher Robin Ali, Ph.D., of the Institute of Ophthalmology at University College London. The new cells not only survived, but also developed into rod photoreceptors and connected to neurons, providing visual signals to the brain. Improvements in pupillary and nervous response to light stimuli were recorded. To attain these results in the human retina, rather than use fetal cells, researchers point to a cluster of cells on the margin of the adult retina which have stem cell-like properties—in other words, they are capable of self-renewal. These could be harvested through minor surgery and grown in the lab to become photoreceptor precursors before being re-implanted on the retina,” Dr. Ali says.The researchers say that this transplant could have positive effects against age-related macular degeneration or retinitis pigmentosa, but they warn that any human application of this treatment is at least five years away.
Posted by Dr. Kevin on December 21, 2006